Benalmádena is situated on the side of the Sierra de Mijas, at 280 metres above sea level, and easy to get to from Malaga, just 20 kilometres away, by the Autovía de Mediterráneo. There are also train and bus links to the town from Malaga. The climate is mild, varying between a minimum winter temperature of five degrees and 35 in summer.
Over the past twenty years Benalmádena has become one of the key tourism centres on the Costa del Sol, triplicating its off-season population of 30,000 inhabitants in the summer period. It is divided into three urban areas: Benalmádena Pueblo, Arroyo de la Miel and Benalmádena Costa. The first is at 280 metres above sea level, a typical mountain village with narrow streets and geranium-potted windows. The second is between this area and the sea, an urban area that grew up around the train station and the main road between Benalmádena and the coast. The third, Benalmádena Costa, is just what the name suggests: a coastal town with all the relevant facilities of such a place.
There is plenty to do here all the year round, among the attractions being the Puerto Marina, the Telecabina, the Casino in Torrequebrada and the golf course of the same name. The marina, in Benalmádena Costa, can take up to almost 1,000 boats of up to six metres long, and almost all types of water sports are practiced here, including hang-gliding and underwater snorkelling. The cable cars (telecabinas) link Arroyo de la Miel with the peak of the Carramolo mountain, and from here, on a clear day, one can see right across to Africa. Heading down from the town on the Torremuelle road, one arrives at the Torrequebrada Casino, one of the best entertainment and conference centres on the entire coastline. In the housing development of the same name one finds the Torrequebrada Golf Course.

Puerto Marina is one of the most important recreation centres in the municipality, with boats moored there from all corners of the world. Apart from sailing, the sporting facilities here include water skiing, canoeing and underwater diving. The harbour area has plenty of bars and restaurants with terraces, where one can simply sit and watch the activity of the port, if one so chooses.
Telecabina

This recently installed facility is the only one of its kind on the Costa del Sol. It leaves from the Tivoli esplanade, crossing high over the motorway to the peak of the Carramolo mountain, one of the most spectacular natural balconies in the province of Malaga, from where one can view the entire Costa del Sol and the mountains of Africa across the Mediterranean on a clear day. There are sign-posted pathways down from the mountain for those who may wish to walk. For information, call: 952 575 038 Fax 952 575 061.

This church is in Benalmádena Pueblo, and to get there one goes from calle Real through the Plaza de España, continuing to the open plaza in which we find the 18th century church..

Tivoli World is the Costa del Sol’s best-known theme and attraction park. Here there is something for everyone: restaurants, theatre and shows in which the top performers in Spain and abroad take part, from Isabel Pantoja to the Moscow Ballet. Tel: 952 577 016 and 902 114 700.

There is a small cove in Benalmádena called Benalnatura, which is a nudist beach. To get there, take the N-340 in the Fuengirola direction and turn off at the roundabout between Torrequebrada and Torremuelle. A concrete road leads down on the right to the beach and chiringuito below. 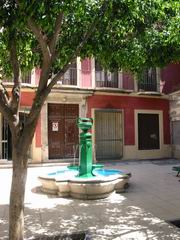 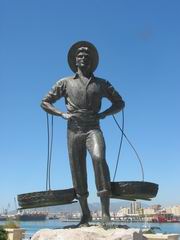 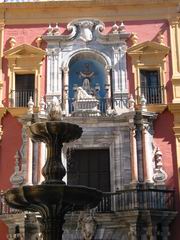 Its origins go back to the Celts who called this spot Arunda; some historians situate the city in Acinipo, and both populations were passed to the Romans; later on it was Muslim and in the XV century, conquered by the Catholic Kings. It was also occupied by Napoleanic troops and defend themselves from them, they organised centers of banditry.

There are a lot of monumental spaces in this city; among the main ones are the Mondragón Palace, the headquarters of the kings from Muslims to the Christians, with Mudejar, Gothic, and Baroque elements; La Casa del Gigante, of Arab origin (XV century); the Palaca of Salvatierra (XVII-XVIII centuries) with a Renaissance facade and the very interesting House of the Moorish King, poorly named, given that it is already the XVIII century; through its gardens you can access the descent to the Mine that goes down to the bottom of the Tagus.

The Arab baths are interesting from the XIII or XIV century, and the famous Puente Nuevo of the XVIII century, work of Martín de Aldehuela, with superimposed arches. The bull ring is the oldest in Spain from XVIII, and Martín de Aldehuela also intervened in this work. The Collegiate Chuch Santa María la Mayor (Century XV to XVIII) is the primitive mosque. The fountain of the Ocho Caños, from the period of Carlos III, is close to the old Arabic bridge over the Tagus.

The minaret of San Sebastian is a Nazarí construction of the XVI century, not far from the Convento del Espíritu Santo, of Gothic-Renaissance transition. El Templete (Small temple) de los Dolores is a votive chapel in the street from the XVIII century. The chuch of father Jesus, of Gothic-Renaissance style, is from the XVI century. Santo Domingo and the Convent of San Francisco were founded by the Catholic kings in 1485. El Santuario Nuestra Señora de la Paz is from the XVI and XVIII centuries.

The popular grove of San Carlos or of Tagus is a beautiful garden from the XVIII century with a large row of balconies with views of the Guadalevin valley. In the Roman ruins of Acinipo, about 20 km in the direction of Setenil, the Roman theatre is preserved (stage, wall, orchestra, and tiers). Benaoján is 15 km away, with the Knows caves of Gato and La Pileta. In the direction towards the coast, the access to the Natural park of the Sierra de las Nieves is located, and the connection to the incomparable Valle del Genal, whose town and chestnut groves, both of which are beautiful, are essential to see.

Ronda on the web

http://www.ronda.net Information from Ronda only in spanish available