The city of Jaen, capital of the Holy Kingdom (the Santo Reino) is situated beneath the hill of Santa Catalina, topped with the impressive castle of the same name, now converted into a Parador de Turismo. From up here, we have spectacular views over the olive groved countryside and the city itself, which spreads out over the smooth slope, forming a compact city, which combines traditional quarters of Arab and Medieval design with monumental areas and modern buildings, in an attractive combination. The impressive Cathedral, key work of the Spanish Renaissance by Andres de Vandelvira, dwarfs the city. 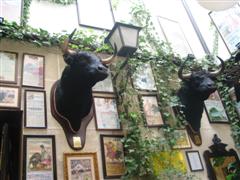 However, there are many more buildings and monuments in this unique city:

Jaen’s Out-of-town Park is situated in the surrounding mountains, a protected natural space due to its environmental and recreational importance.

The first stable human settlements date from the Palaeolithic. Iberians, Carthaginians and Romans also lived here. It was called Aurigi in this period.

Scipio takes the city in the 207 B.C. The fortress is extended in this period.

It enjoyed a great splendour during the al-Andalus period. It was an important and much disputed city throughout this period in history.

The Christian conquest was led by King Fernando III in 1246, and the Bishop’s seat moved here from Baeza. After the conquest, the Christians took advantage of the city’s border location to raid Muslim lands. Many legends and popular songs relate these episodes.

After the fall of the Kingdom of Granada, the city loses its strategic importance. It enjoys a certain resurge from 1833 when it became the capital of the province..