Seville, capital of Andalusia, Roman, Arabic, Renaissance, Baroque, Latin American, Marian, flamenco, bull-fighting, modern, festive, bright, perfumed, sea-faring, traditional, hospitable, gracious, cosmopolitan, religious...All of these adjectives, and many more can be applied to this city, which not only typifies all that is “Spanish” and “Andalusian”, but also contains such innumerous artistic, cultural, leisure, social and tourist attractions, that is has also become one of the most universal, best-known and most-visited cities in the world, birthplace and inspiration of writers, painters and artists in general. 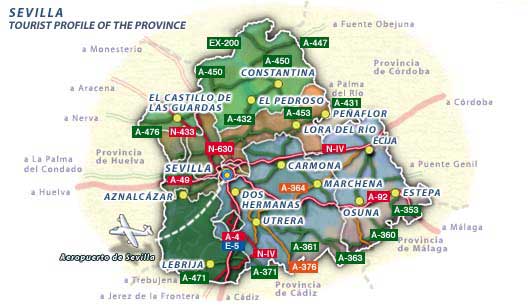 Impossible to find another urban centre which boasts such varied and unusual monuments and places of such beauty as the Giralda, the Cathedral, Los Reales Alcázares (Arabic Palace), the Torre del Oro, the Patio de los Naranjos, the Maestranza (bull-ring), the Casa de Pilatos, the Plaza de España, the María Luisa Park, the Maestranza theatre, the St. Telmo Palace, the Archivo de las Indias (Indian Archives),the Barrio de Santa Cruz (Santa Cruz district in the city centre), the Lonja,*** the Palacio Arzobispal (Archbishop´s Palace), the Fábrica de Tabacos (Tabacco Factory), the Town Hall (Town Hall), the Dueñas Palace, the D.Fadrique tower, the city walls, the Macarena basilica, the Fine Art Museum, the Contemporary Art museum, the Alameda de Hércules ***, the barrio de Triana (Triana district), the bridges over the Guadalquivir, the Cartuja island and monastery and the site of Expo 92, the buildings from the Universal exhibition in 1929, the Casa de Luca de Tena, the patios of its traditional houses, the balconies and railings, as well as an endless number of churches, convents and other details which convert the ancient city centre into an open-air museum. If we add to this its taverns, its cuisine, its festivals, and the humour and hospitality of its people, we have formed a generous whole, full of colour, drama, light, music, joy, tradition and modernity which is difficult to match.

According to legend, the foundation of Seville can be traced back to the mythical city of Tarsis, founded by Hercules and which he gave to his son Híspalo, hence its former name: Híspalis.

Its origins go back to the VIII century b.c., during the periodo tartésico *** tartary period, starting with a settlement named Ispal. In this town trading took place with Greek, Carthaginian and Phoenician sailors. It was destroyed in the II century b.c. in the wars between Carthaginians and Romans. When the Punic wars ended, it was reconstructed by the Romans and renamed Hispalis.

Also in Roman times in formed part of Hispania Ulterior and following the administrative division of the Emperor Diocletian it became art of Betica.

With the fall of the Roman Empire, the vandals entered the city in 428. They destroyed many buildings, and were later ousted by the goths. In the year 573 the city is taken by Leovigildo. From this era comes the importance of the bishops St. Leandro and St Isidor, author of the las Etimologías *** Etymologies.

During the Al-Andalus period, in the early years of the VIII century, the Arabs arrived under the leadership of the general Musa ibn Nusayr converting Seville into one of the most beautiful cities of Al-Andalus. It began to become known as Isbiliyya.

In the IX century the Normans attacked Seville, causing serious damage, and they were finally repelled by Abderramán II who then fortified the city. From the year 1013 onwards, during the reign of the taifas, the city enjoyed a period of prosperity.

The almoravids also passed through the city, from 1086 onwards, as did the almohads, from 1144 on. Its economic prosperity in this period is due to its trade with North Africa. The Great Mosque is built, and the Giralda, one of its towers, is still with us today.

The Christian conquest was led by Fernando III in the year 1248.

The discovery of America is another impetus for Seville. In 1503 the Casa de Contratación (Contract House) was founded to check all persons and goods travelling to or from America. The city continues to prosper due largely to its port. It becomes one of the most important cities in the Western World. This prosperity influences the architectura, religious imagery and painting.

Due to the increase in size and draught of ships, it began to become difficult for these to enter the port via the Guadalquivir, and for this reason at the beginning of the XVIII century, all trade with the American continent was transferred to the city of Cadiz, more suitable for this activity, and so Seville entered a period of decline.

During the XIX century it is internationally renowned, through the stories told by the numerous travelers who visited the city.

With the Ibero-american Exhibition held in 1929, the modernisation of the city in the XX century begins, creating an urbanistic infrastructure as required by the times we live in.

With the establishment of democracy at the end of the seventies, Seville is proclaimed capital of the la Comunidad Autónoma de Andalucía (Autonomous Region of Andalusia).

In 1992 the Universal Exhibition was held here, leading to further urban expansion, in preparation for the next millenium.