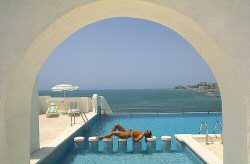 A direct link between Europe and Africa, and the place where the Atlantic Ocean meets the Mediterranean, Andalusia has been fought over by numerous cultures since the earliest times of civilization, being one of the areas of settlement of our prehistoric ancestors.

Andalusia´s main river, the Guadalquivir, from the Arabic, meaning "Great River", together with its tributary, the Genil, forms a fertile valley which constitutes the fundamental geographical axis of Andalusia. From its beginnings in eastern Andalusia, in the Sierra de Cazorla, to its outlet into the sea in the west, next to the marshes of Doñana National Park, the Guadalquivir is a source of life all along its journey across Andalusian territory.

Numerous tributaries, springing from the mountain areas along its banks, pour the excess water from the reservoirs in Sierra Morena or the Betico Mountains into the Guadalquivir. Such water takes on an important role in regulating the water supply, not only for human consumption, but also in the case of heavy rains and the consequent river floods.

Despite the importance of the Guadalquivir, fifty per cent of the region is mountainous. A third of the territory stands above 600 metres, with many high plains areas, and there are 46 peaks above 1000 metres.

The queen of heights is undoubtedly the Sierra Nevada, in the heart of the Penibético System, where summits above 3,400 m, such as el Mulhacén and el Veleta, preside majestically over the rest of the nearby ranges.

Within forty kilometres it is possible to travel from this alpine landscape to the tropical shores of the Mediterranean. The Andalusian coast, almost 900 km long, is home to a large number of towns and beaches, the delight of those who visit them. In recent years, Andalusia has made great efforts to improve the quality of its coastal area to suit the increasingly demanding tourist market.

Within this diverse landscape live more than seven million inhabitants, spread out among the diverse habitats which abound. The majority live in the big cities - the eight provincial capitals (Almería, Cádiz, Córdoba, Granada, Huelva, Jaén, Málaga and Seville) and Jerez de la Frontera head the list with regards to population growth - while many others prefer to live in towns, small mountain villages, country estates and farmsteads. 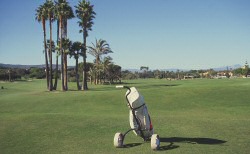 This collection of environments forms a blend of tourist offers, which range from the monumental glory of the big towns to the traditional nature of small villages, a continual source of inspiration for all types of artists.

Nowadays, Andalusia is a modern community, equipped with a great infrastructure that knows how to welcome its visitors, and which, despite being conscious of moving with the times, takes great pains to maintain its roots and to look after its important cultural and monumental patrimony.

Andalusia has also made a great effort to back sports, not only due to the growing interest among its people for this healthy way of caring for the body, but also in response to the importance that sport has amongst the visitors to this community. Apart from the great variety of sporting events held in this region, ranging from the most simple to high-level sports events, there are always world class competitions on the horizon to keep hopes high for the future.